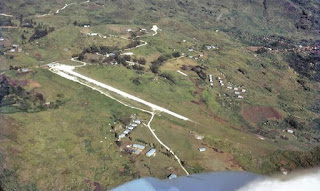 The grieving family members of the two Kabwum primary school teachers and their two children who were all killed in the recent road accident on Saturday, have called on the Morobe provincial government and political leaders to address the transportation woes of the district.

The Yaing and Brenda Munga, their three-year-son Nathaniel and two-year-old daughter, Justline, were killed while they were travelling up to Nadzab airport with the intention to fly out back to Komba local level government area.

Both were teachers of Tauga Primary school, and are part of the many public servants who face transportation struggles every week because the only means is by North Coast Aviation flight services.

Fellow teacher and relative, Kevin Panpan, says their struggle is real as there are thousands of people who are travelling every week but have to fight for a few seats available for each flights.

He says the recent deaths of the two NCA pilots, Thomas Keindip and David Tong, has not made their situation any easier.

He says the Morobe provincial government and political leaders must immediately address the transportation and accessibilty issues of Kabwum district, which is on the three northern rural districts of Morobe, which are not connected by road to Lae.

Subsidizing or giving assistance to NCA or constructing a highway, he says, are good options.

“Because Kabwum is not linked to Lae by road, our only transport source is through light aircraft planes, and in just a short while ago our two bush pilots lost their lives,” Mr Panpan said.

“We have 18 seats on a plane but there are thousands of men, women and children who turn up in crowds at the North Coast Aviation office for a ticket for one of those 18 seats," Mr Panpan says.

Family members say their death is unecessary and could have been avoided if there is ease of transportation systems connecting Kabwum.