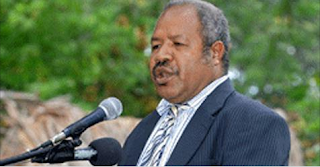 The defamation proceedings are for what he said was a defaming public Facebook post made by Mr Agen on his personal page, during the height of Tuesday voting impasse in NCD, that Mr Parkop was involved.

Part of the post from Mr Agen updated at 11:56am on Tuesday stated that, “Powes Parkop must be banned from contesting this election – Mr Parkop’s plan to hijack the democratic process of election was unraveled and stopped by a very well drilled police unit in NCD.” It read.

Mr Parkop expressed his utter disappointment at the turn of events being accused of involvement in any illegal ballot papers or boxes to rig the election.

“It is ironical for me who has been complaining about illegal ballot box plus on Monday I made this complaint, last week I made the call on the electoral commission to take serious step on this rumour that has been going around,” Mr Parkop said.

“To be accused of this same allegation is just unacceptable. For me I want to categorically state that am not involved of have never been involved in that type of behavior or practice.”

Mr Parkop has also involved the police in the case he has initiated against Mr Agen.

“I am totally amazed that this type of allegation will remain. Today what I want to say is that I have given instructions to Albatross Lawyers to commence both civil and criminal proceedings.”

“I have given instructions to lawyers to commence civil proceedings against Rob Agen because he is the one who posted on social media that I had conspired to mark illegal ballot papers and they were held at Boroko police station stating that I was related to somebody that got arrested yesterday,” Mr Parkop said.

Parkop also named another individual (named) who shared Mr Agen’s post on the same day at 12:55pm as the other he is filing proceedings against as well.

“This is taking political campaign to a very low level to manufacture lies and repeat lies and spread lies.”

“Of course everyone says it is a dirty game but we must maintain some certain standards. I do not go around spreading certain lies about other candidates.”

“As a result of yesterday (Tuesday) people are under the impression that I am part of a conspiracy to undermine the election in the capital city and around the country,” Parkop added.

When contacted by the Post Courier yesterday Mr Agen, said he stood by his post on Facebook saying that he had evidence to support his statement.

“We have evidence that Parkop is directly, indirectly involved in facilitating the impasse that took place yesterday,” Mr Agen said.

Asked if he stood by his statement he made online, Agen said he stood by it, “absolutely 110 per cent”.