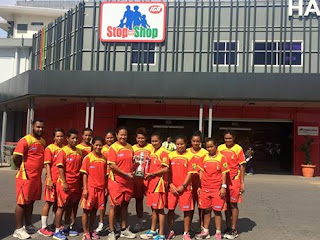 Team Captain Pauke Siaka, who was with her team to present the trophy thanked City Pharmacy Limited (CPL) Group and its staff for their support in assisting her girls and the team as a whole for the successful outcome and is looking forward for their support in the future.

General Manager –Retail Operations for CPL Mr. Lee Green said CPL will continue to assist PNG Lewas in future games to represent the country in other parts of the world.
He received the trophy on behalf of CPL and thanked the teams for the presentation. Mr Green further stated that it is one of the obligations of the company to assist women in the country in many ways they can.
SHARE THIS
Share it Tweet Share it Share it Pin it