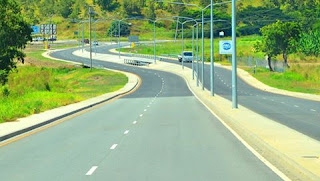 One of the founding Fathers of the Nation, Sir Reuben Taureka, has been bestowed the respect of having the nation’s newest highway named in his honour.

The Prime Minister, Hon. Peter O’Neill CMG MP, said the Sir Ruben Taureka Highway has been built to a standard was much higher than any other road in the country, and sets a new quality expectation for road construction.
“Sir Ruben Taureka was one of the first Ministers in our country’s Government, he represented the people of Abau for many years and also served his people as a medical doctor by profession,” the Prime Minister said.
“As one of the founders of our country, Sir Reuben Taureka made a lot of sacrifices so that we can be here today.
“That is why it is only fitting that we name this Highway, from Six Mile all the way to Central City, the Sir Ruben Taureka Highway.
“It does not matter which side of politics a person is on, and if we are with them or not, we must honor our Leaders and recognise their contribution
“This is another way we can ensure that people for generations Sir Reuben Taureka's name and can learn about his work for the country.
“We must name infrastructure and roads such as this to recognize their contribution to their people and to the nation.”
PM O’Neill praised the workmanship that went into the highway construction, that included more than one million man-hours and provided jobs for 350 Papua New Guinean men and women.
“This is a very beautiful road that we are going to enjoy for many years,” PM O’Neill said.
“The Sir Ruben Taureka Highway is of a standard that must be the benchmark for new road infrastructure throughout the country.
"This road will last for many decades and is built to the quality that our people deserve, so that they can go about their business, carry their goods to market and travel in comfort.
The 14 kilometer stretch of the Sir Ruben Taureka Highway is from 6 Mile to Bautama, and marks a dramatic improvement from the previous road that had not changed in the decades since it was built and rarely been maintained.
SHARE THIS
Share it Tweet Share it Share it Pin it