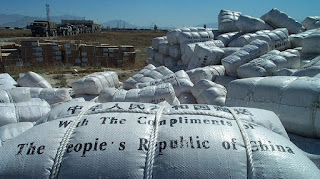 Aid and investment from China runs the risk of destabilising Pacific island nations, according to an Australian Strategic Policy Institute report.

The flow of no-strings-attached foreign aid from countries such as China to Pacific island nations could destabilise Australia's neighbourhood.

That's the view of a new report from the Australian Strategic Policy Institute released on Monday.

Author Joanne Wallis argues the influx of aid and investment from non-traditional external powers such as China runs the risk of destabilising recipient states.

Australian aid is conditional on certain governance or development outcomes, but Chinese diplomats present their aid as coming without any political strings attached, and this may fuel corruption and violence.

The report also questioned the sustainability of China's soft loans to some Pacific nations, pointing out that in 2009 Tonga's debt to China was $US100.4 million (AUD$132.9 million), which was equivalent to one-third of its national income.

Australia can't afford to be complacent about the shifting geopolitical environment in the South Pacific, the report says.

“Our attention to the region has peaked at moments when the region was perceived to pose an imminent potential threat,” Wallis said.

“Beyond those moments, our foreign and strategic policy in the region has been characterised by unclear, inconsistent and competing interests and intentions, which has reduced its effectiveness and undermined Australia's influence.”

Wallis said Australia has a strategic interest in being the region's principal security partner in order to ensure that no power hostile to Western interests establishes a strategic foothold, from which it could launch attacks, or threaten allied access or our maritime approaches.

The report said instability in the Pacific raised two key challenges for Australia - rescue obligations and how to respond to other countries' interventions.

The Australian-led Regional Assistance Mission to the Solomon Islands (RAMSI) moved to restore law and order in 2003, when the country was at the mercy of warlords and the government had no control outside the Honiara capital.

It has cost an estimated $2.6 billion (US$1.9 billion) and has had “questionable long term results”.

The report said China deployed 4000 troops to Sudan to protect its investment in an oil pipeline with the Malaysian firm Petronas.

“It's unclear whether, in the event of a serious threat to the Ramu mine (nickel), China may similarly intervene in Papua New Guinea," the report said.