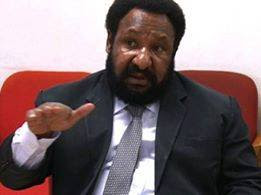 Papua New Guinean's have been urged to pressure MPs in Government to vote against the constitutional amendments to increase nomination fees from 1-10 thousand kina.

Opposition Leader Don Polye made this call following the Supreme Court’s verdict last Friday, rejecting the Ombudsman Commission’s bid to stop Parliament from further votes, debate and deliberation on the issue.
He said the amendment bill infringed on the citizens’ constitutional right to contend for any public office.

Mr Polye challenged MPs in government to use what he termed as, ‘moral conscience’ to oppose the bill when it goes before parliament for its final readings when Parliament resumes on March 28.
Meanwhile, the opposition leader has not ruled out a possibility of filling an application for review, adding that they are discussing the decision with their lawyers.
SHARE THIS
Share it Tweet Share it Share it Pin it