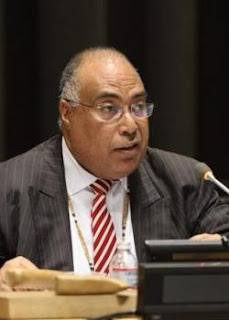 Frustrated Melanesian nations are concerned their voices are going unheard and blame global politics for intensifying disasters, conflict and food insecurity in the region.

At the conference “Security3: Food Security, Biosecurity and National Security in the Melanesian Arc” held in Canberra last month representatives from the governments of Fiji and the Solomon Islands urged donor countries, including Australia, to take stronger action against climate change, warning that the writing's on the wall.

The countries have long been among the most outspoken on the dangers of climate change.

“Sometimes I feel that it’s genocide,” Collin Beck, Solomon Islands high commissioner to Australia, told the audience. “We know what is going to happen.”

The global responsibility to fight climate change, they said, needs to be taken seriously — and for the governments of many developed nations — it is not.

War, famine, natural disasters and food security are among the global issues that were directly linked to climate, the speakers said.

Addressing climate is in the global interest. “It is the heart of our problems,” Yogesh Punja, Fijian high commissioner to Australia, explained to the audience.

For Australia, a fundamental role of the aid program is in creating a secure Indo-Pacific region. But there is an increased risk of conflict caused by the relocation of climate refugees that threatens government stability and regional economics.

“After four years, we will be in crisis mode,” Beck warned. “One natural disaster can wipe out 10 years of investment in development. In the case of floods in the Solomon Islands, one day it can wipe out 10 percent of our GDP.”

The problem, Punja said, was that despite links between climate and security issues — including violent extremism — there was not enough discussion on the impact of climate change on the ground. “It is important to get the message out — not just people talking about it — but seeing the actual impact on the ground. That is why when Donald Trump was announced as the president, we invited him to Fiji to see the actual effects of climate change because he still doesn’t believe it.”

As politics sees the U.S. move from focusing on global issues to national ones, many wonder what the knock-on effect will be.

“Looking at it from a global perspective and hearing what the new U.S. administration is saying about it — they are telling us we do not matter,” Beck said. “When you start reversing from global responsibilities, it is worrying.”

Australia, too, is causing concern for Melanesia. Despite signing the Paris agreement and investing new funds into the Green Climate Fund, as well as co-chairing the fund in 2017, Australia is sending conflicting messages on the value of renewable energy. The federal government is now pushing for “clean coal” to be considered as part of solutions to meet renewable energy targets.

“Everybody is confused,” Punja said. “As a region, I don’t think we have grasped the true position Australia has.” Australia’s talk and actions were conflicting, Punja said. He pointed to a programme to develop Northern Australia's coal export industry and controversial approvals for badly polluting, heritage-wrecking coal mines, as key concerns.

Financially, he noted, there is little barrier to countries such as Australia and the U.S. from doing their part.

And Punja warned that Australian politics today would affect its politics and responsibilities of the future. “We have all heard of climate refugees, and I can assure you they will be coming across the Pacific to Australia.”

Aid programmes were a key area that could address the needs of Melanesian countries in becoming more resilient to the effects of climate, but Punja and Beck both said current programs needed to include greater involvement of recipient countries to ensure funds are better directed to areas of critical need.

“It has never been a question of lack of money — there is always money there,” Beck said. But he said there were too many players doing projects on climate and oceans and duplicating efforts. “Everyone is doing something, but it is so little and it is everywhere. If we have a single authority with a coordinated approach and stop silos, we can see the whole picture and money can be better spent.”

Multilateral agencies, China, and Russia are among the players competing in the region. But to date, Beck believes, aid has not been successful in achieving aims of sustainability for Melanesia. “For anyone that comes to our shore, we will be saying ‘please look at our productive sector. Please look at our energy.’ But partnerships keep going in a different direction.”

Investing in large-scale renewable energy and focusing on improving capability and services for rural areas, is a particular focus for the Solomon Islands in building a climate resilient and sustainable nation.

The Paris agreement, Beck said, was the “first and last line of defense” in the global response to addressing climate change. He warned there were probably only four years left for nations to take action in order to to avoid a regional disaster.

The ticking clock is not something the 9.7 million strong region is taking lightly. Representing 98 percent of the Pacific region, Melanesia is addressing the issue at every forum and taking global leadership roles to ensure positive action is being taken, including pushing for their issues to be addressed in the Sustainable Development Goals.

“We have fought tooth and nail to have attention on energy, tooth and nail on climate change, on oceans,” Beck said. “This is one of the reasons Fiji will be president of COP23. This is why Solomon Islands is the vice president and one of the reasons at the General Assembly of the United Nations Melanesia is president of the general assembly. Solomon Islands is one of the vice chairs of the General Assembly. We take this issue seriously.”

Despite global leadership, Beck said it was not the sole responsibility of Melanesia to fight climate change. “It’s like all of us going on the same plane. There are some going in business class — but when the plane crashes — we all suffer. We are all in this together.”

The Paris agreement allows Melanesia to enhance their mission of creating a Pacific region and a world that is resilient to the effects of climate change. It is a mission the region will continue to be vocal on as it is life and death for their people and culture. But despite their leadership and vocal push on the global leaders to address climate change, it has not prevented Melanesia from feeling that their voices are getting lost in new global politics....