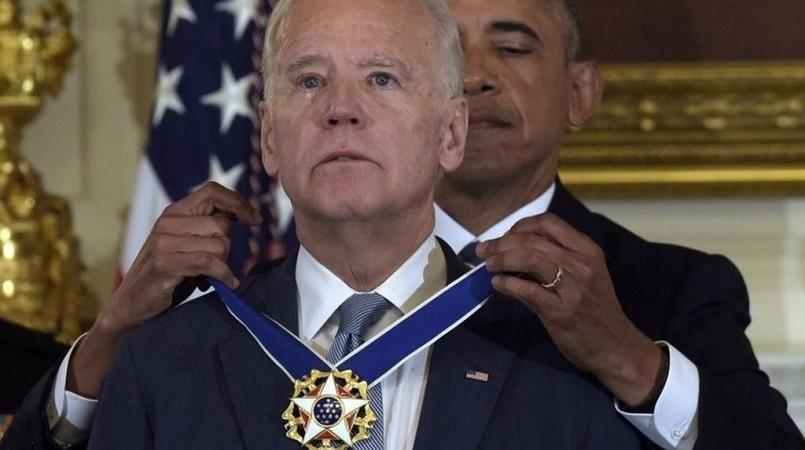 President Barack Obama has awarded an emotional and surprised Joe Biden the Presidential Medal of Freedom, the highest US civilian honour.

Mr Obama praised his vice-president for his "faith in your fellow Americans, for your love of country and your lifetime of service".

The award comes as both men prepare to leave office when Donald Trump is inaugurated on 20 January.

Mr Biden has said he plans to stay active in Democratic Party politics.

A visibly emotional Joe Biden stood by as Mr Obama heaped praise on what he called the "best possible choice, not just for me, but for the American people".

The medal was awarded with distinction, according to the New York Times.

That additional honour has been reserved in recent administrations for just a handful of recipients, including Pope John Paul II.

Mr Obama joked that the internet would have one last chance to mock the pair's "bromance".

Mr Biden said he was "part of the journey of a remarkable man who did remarkable things".

He said that he had had no idea the award was coming.

"I had no inkling. I thought we were coming over to Michelle for you, Jill and Barack and I and a couple of senior staff to toast one another and say what an incredible journey it's been.

"Mr President, you got right the part about my leaning on Jill but I've also leaned on you and a lot of people in this room.

The highest civilian award of the United States
Established in 1963 by President John F Kennedy, superseding the Medal of Freedom
Citation: "An especially meritorious contribution to the security or national interests of the United States, world peace, cultural or other significant public or private endeavours"
Major categories of recipients: politics; business; military; music; film; journalism
Only dual recipients: Colin Powell and Ellsworth Bunker


Mr Obama said that Mr Biden's career was "nowhere close to finished" both at home or abroad.

Mr Biden has said he plans to work on policy issues at institutes at the University of Delaware and University of Pennsylvania, and continue his efforts tackling cancer, which claimed his son Beau in 2015.

Mr Biden gave an hour-long interview with media outlets on Thursday in which he strongly criticised Mr Trump for his condemnation of the US intelligence services.

"It is really very damaging in my view to our standing in the world for a president to take one of the crown jewels of our national defence and denigrate it," Mr Biden said.

"It plays into, particularly now, the Russian narrative that America doesn't know what it's doing."

However, he was full of praise for his successor, Mike Pence, saying he had sent him memos on how to handle certain situations.