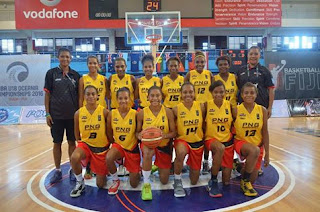 The Papua New Guinea Under 18 Women’s National Basketball Team have claimed the 2016 FIBA Oceania Championships Division-B Bronze Medal, following their 70-52 win against Guam this morning in Suva, Fiji. It was the ideal ending to what has been a challenging week for the women’s junior representative side. PNG showed tremendous character, but were winless throughout their Pool B preliminary matches, going down to New Caledonia (59-20), Guam (57-56) and New Zealand (121-13). The three losses resulted in the team moving into Division B and a semi-final matchup with host nation Fiji. While the girls battled valiantly, Fiji were too good securing a 70-42 victory.
After showing improvement all week and with a medal on the line, PNG displayed their best performance in the rematch with Guam, running away to an 18-point win.

Svetlana Arthur capped off an outstanding tournament with 15-points and 15-rebounds,
while teammate Jennifer Haro also stood up in the team’s final game, compiling 13-points and a massive 23-rebounds. PNG Under 18 Women’s National Team Head Coach Mary Elavo was feeling proud after the team’s final game result.
“Everybody contributed towards that win so it really feels great,” Coach Elavo said.
“Each player had positive input when they were on the floor and as a coach, to see the team come together like that, makes it all very rewarding.” Coach Elavo said this year’s Oceania Championships had been a real learning curve. “It was certainly a challenging week, but it was great for our younger girls to get exposure
and see what level they need to be at to compete against the other pacific countries.”“For future tournaments it would be ideal to have a bit more preparation time, so we can really work hard to develop our player’s skills leading in.”
“For PNG teams to have success in the long-term though, we need to start teaching the
fundamentals of the game to kids at a much younger age.” The PNG U18 Women’s National Team is scheduled to return into Jacksons International Airport, Port Moresby on Monday, December 12 at 12:10pm. (Air Niugini flight PX085).
SHARE THIS
Share it Tweet Share it Share it Pin it