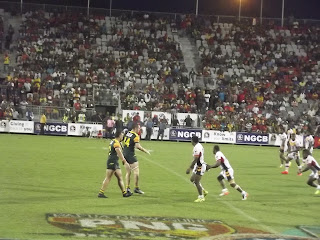 PAPUA New Guinea Rugby Football League chairman Sandis Tsaka confirmed that the PNG Hunters will play an NRL side in a pre-season fixture in Port Moresby next month.

The PNGRFL are currently in talks with the Canberra Raiders and the Canterbury Bankstown Bulldogs to host a trial match at the National Football Stadium in February.
The date is yet to be confirmed, with the Auckland Nines scheduled on the weekend of Feb 4-5.

Tsaka made the comments before flying to Sydney earlier this week, where he would meet with Raiders officials, including coach Ricky Stuart and Bulldogs mentor Des Hasler, about the proposed trials.
“I’m happy that Raiders or Bulldogs have shown interest,” Tsaka said.
“They will give our players a great challenge.
“It will also be their chance to show what they can do against NRL-calibre players.”
At the beginning of this year, the Penrith Panthers, featuring Jamie Soward, Nathan Cleary and Leilani Latu, played the Hunters at the NFS.

“As usual, I’m confident that the local supporters will come in numbers to not only support the Hunters but to see the NRL players play live.”
Tsaka was supposed to have returned yesterday but extended his stay due to other rugby league commitments in Brisbane.
“This trial will also be used by the Hunters management to settle on its final squad for the Queensland Rugby League Intrust Super League in Australia and PNG.”
Hunters coach Michael Marum was aware plans for the pre-season fixture as a lead up to the March kick-off of the Q-Cup.
A spokesman at NFS said yesterday that after the Under-20 women’s soccer World Cup, the pitch was in excellent condition, owing to the initial upgrading work done in preparation for the tournament. The National / ONEPNG
SHARE THIS
Share it Tweet Share it Share it Pin it