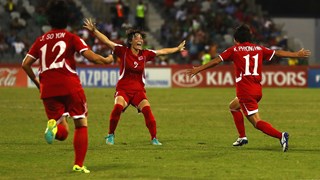 Korea DPR are the first team into the 2016 FIFA U-20 Women’s World Cup semi-finals after an epic 3-2 extra-time win over Spain in Port Moresby on Thursday.

The North Koreans led by two at the half-hour mark and while Spain drew level midway through the second half, it was the East Asians who found an extra-time winner in a contest that could have gone either way.

Korea DPR settled quicker of the two sides, easing into their trademark passing game and fluid movement. Yet it was from a corner that they broke the deadlock on 18 minutes with a move straight from the training ground. A perfectly-flighted corner from Jon So Yon was met by an unmarked Ju Hyo Sim who powered a header into the net from little more six yards.

The Asian side doubled their advantage on 30 minutes as a poor Spain clearance allowed Ri Hyang Sim to pounce on a loose bouncing ball in the penalty area and lift her effort over the advancing goalkeeper.

Despite the double set-back, Spain fought their way back into the contest and they netted a deserved goal as Nahikari Garcia coolly slotted home a rebound after Patricia Guijarro’s long-range shot was only parried by Kim Myong Sun.

Spain drew level just past the hour-mark, with goalkeeper Kim again at fault. This time Andrea Falcon’s tame left-footed strike was pushed back into the path of Lucia Garcia, who scored easily from close range.

The match became an end-to-end contest with plenty of impressive attacking passages of play, and a tense finale between two well-matched sides remained in the balance throughout the latter stages. The best chance fell to Sung Hyang Sim but the substitute dragged her shot barely an inch past the far post four minutes in added time.

Thirty minutes of extra time followed, with the tone unchanged. It was Korea DPR who eventually made the breakthrough as Kim Phyong Hwa scored the winner, somehow firing a shot through a packed penalty area just a minute into the second period.