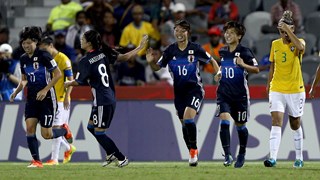 Japan are into the FIFA U-20 Women’s World Cup semi-finals for the second time after an impressive 3-1 win over Brazil in Port Moresby on Thursday.

A first-half goal from Miyabi Moriya and a second-half double from Shiho Matsubara were enough for the Asians to progress on the back of yet another stylish performance.

Japan dominated goalscoring opportunities throughout the match, commencing with Asato Miyagawa’s shot on the quarter-hour mark which clipped the frame of the goal.

Their pressure started to mount as half-time approached and Mami Ueno let fly over the crossbar, while Hina Sugita did likewise forcing Carla into a save.

Finally the breakthrough came as Yuka Momiki broke into the left side of the area and squared for Moriyato to slot home a few moments before the half-time whistle.

It was almost a case of déjà vu five minutes after the break as Japan repeated their goalscoring move, this time with even more precision. Moriya was released down the flank and her square ball behind the backline rolled perfectly into the path of Matsubara, who could not miss.

Matsubara then failed to find the target by mere inches with a snap-shot, but it was little surprise when she soon nabbed her second and Japan’s third at the midway point of the half. Remarkably, the goal followed a similar pattern as a low cross from the right eluded everyone, before being picked up by Matsubara, who stepped inside a defender and placed her shot into the far corner.

By now, Brazil were being run ragged and the only surprise was that Japan were unable to extend the victory margin. In fact, it was Brazil who pulled a goal back in injury time thanks to a penalty for Gabi Nunes. Source: www.fifa.com
SHARE THIS
Share it Tweet Share it Share it Pin it