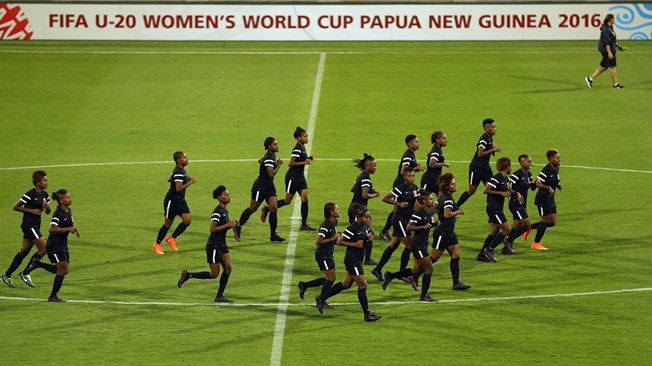 None other than ever-present Brazil await hosts and tournament debutants Papua New Guinea on the opening day of the FIFA U-20 Women's World Cup. Meanwhile, Canada kick off against Spain, who are back 12 years after their only appearance at the event, while Nigeria – the beaten finalists last time round – meet Japan in what promises to be an entertaining affair. Last but not least, Korea DPR take on Sweden.

The stage is set for a spectacular start to the FIFA U-20 Women's World Cup Papua New Guinea 2016. FIFA.com previews the proceedings below.

Match of the day
Japan-Nigeria, Port Moresby, 13 November 2016, 19:00 (local time)
Two-time runners-up, in 2010 and 2014, Nigeria naturally have their sights firmly set on going one better this time round and lifting the trophy on 3 December. However, they will be getting the long path towards possible glory underway against Japan, another team who never lack ambition. The upshot should be a fine spectacle for the fans featuring no shortage of speed, physical prowess, thrills and skills.

The Japanese ranks will include Yui Hasegawa, one of the inspirations behind her side's triumph at the FIFA U-17 Women's World Cup Costa Rica 2014, where she was awarded the adidas Silver Ball. The Nigerians also have their fair share of star names, including notably Rasheedat Ajibade, who goes into the tournament fresh off captaining her country at Jordan 2016, where she was the Live Your Goals Player of the Match in the scoreless draw with England.

The other matches
Anticipation has gripped Papua New Guinea. Having given all the participants a rousing reception, the locals in Port Moresby simply cannot wait to see their team take their first steps. The hosts have not been handed the easiest of assignments to open their campaign, but they will be looking to feed off the home crowd's fervent support to spring a surprise against a Brazil side who are hungry for success.

Also part of the opening-day fray are Sweden and Spain, respectively the champions and runners-up in the European qualifying competition. The Swedes are up against Korea DPR, who took Japan all the way in the AFC U-19 Women's Championship final before succumbing on penalties, while the Spaniards will be bidding to break down Canada's defensive fortress – the Canucks conceded just once en route to booking their berth in Papua New Guinea.

Player to watch
Deanne Rose (Canada)
Prolific forward Rose is primed to give the Canadian fans yet more joy, having played a key role in her country claiming a bronze medal at the Women's Olympic Football Tournament Rio 2016 before finding the net last month in Jordan. Now the 17-year-old is intent on making her mark at a third major international tournament of the year by showcasing her eye for goal and power – which makes her a real handful for opposition defenders – out on the pitch in Port Moresby.

The stat
2 – Two of the four countries that have featured in every edition of the FIFA U-20 Women's World Cup are in action on the opening day of this year's event: Brazil and Nigeria.

The words
"This is the top competition the girls can play in at their age and for many of them it'll also be their last tournament at youth level. For one reason or another, they're all really excited and raring to go. Their excitement goes beyond any of the possible permutations in the tournament – it doesn't matter who they have to face or what the conditions are." Spain coach Pedro Lopez