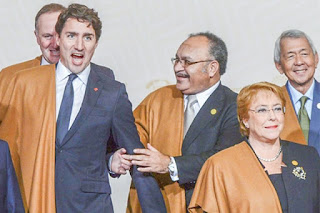 Papua New Guinea Prime  Minister Peter O’Neill is in Cuba for a three-day State visit at the invitation of Cuban President Raul Castro.
He arrived in Cuba yesterday after attending the Apec leaders’ meeting in Peru.

According to a Government statement, O’Neill will hold talks with Castro and sign a memorandum of understanding to establish formal bilateral relations with the country. Current diplomatic ties are fostered through the PNG embassy in New York and the Cuban office in Canberra, Australia.
The two leaders will also discuss trade and economic relations and sign a framework agreement to form the basis of the trade and economic cooperation.

O’Neill and Castro will also sign another memorandum on a health cooperation programme to facilitate the recruitment of Cuban doctors to work in public hospitals in PNG.
Health Secretary Pascoe Kase and other PNG officials had arrived earlier in Cuba to discuss technical requirements and collate information on the expertise and capabilities of Cuban doctors and their medical facilities.
There will also be a memorandum signed on a sports management programme and a visa exchange programme.

The sports programme will involve the engagement of technical expertise in boxing, which Cuba is globally renowned for.
O’Neill and Castro are expected to agree on a visa-on-arrival arrangement for PNG visitors to Cuba and vice-versa.
He is also expected to invite Castro to visit PNG.
O’Neill is the first leader from PNG and the Pacific region to visit Cuba and meet Castro, who took over leadership of the communist island state from his infamous dictator brother Fidel Castro in 2008.

Meanwhile, last weekend in Peru, O’Neill confronted Facebook founder and chief executive officer Mark Zuckerberg about the adverse influence of the social network on developing nations such as PNG.
He told Zuckerberg that Facebook was a “tool of disruption in some societies when it also carries misinformation and malicious lies that are wrong, but are never checked for fact”.
SHARE THIS
Share it Tweet Share it Share it Pin it