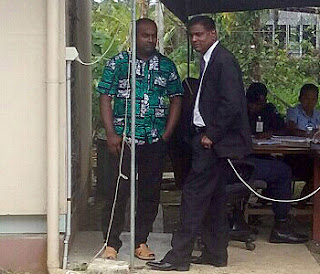 A 34-year-old bus driver who has been charged with raping a 12-year-old girl, has been remanded in custody until Thursday.

Sanjay Naidu appeared before Magistrate Charles Ratakele and his bail decision is expected on Thursday.

His lawyer Jiten Reddy said that he had filed a formal bail application last Friday and his client’s liberty has been prejudiced as the court registry did not issue a notice since last Friday.

Reddy said that this has resulted in the police prosecution not filing a formal response.

Magistrate Ratakele has given the prosecution two days to submit the response on the bail application.

The matter will also be transferred to the High Court.

Naidu allegedly raped the 12-year-old child along one of the bus stops along Princes Road after the child failed to get off at her intended destination.

Police say what is of great concern with this case is the allegation against the accused where he committed the act fully realizing the vulnerable state of the victim who had fallen asleep during the course of her journey.

The victim had boarded the bus from Nausori and had fallen asleep missing her stop.

It is alleged the bus driver did not attempt to wake the child up.

The alleged offence took place while the driver was on his last trip and committed the offence along one of the bus stops along Princes Road.

The alleged incident occurred on the 12th of this month. source: Fiji Village