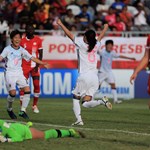 Japan proved that their 1-0 defeat against Spain was a mere blip, as they turned on a perfect illustration of their trademark possession game. The result, combined with Spain’s loss to Nigeria, lifts Japan to top spot in the group ahead of the Europeans, setting up a quarter-final against the second-placed team in Group A.

Canada set up with a lone striker seeking to soak up early Japan pressure. Despite their deep-lying formation, it was Canada who had the best early chance but Sarah Stratigakis was unable to get any real power on her header.

Yuka Momiki was a constant menace with her jinking dribbles and passes around the penalty area, as well as perfect dead-ball delivery. It was the latter that brought about the opening goal as her corner was not dealt with by the Canada defence, and Yui Hasegawa was on hand to push home the loose ball.

The advantage was doubled a few minutes prior to the break as Mami Ueno finished the rebound from Lysianne Proulx's save, after Momiki was put though in on goal following a one-two on the edge of the penalty area.

Canada had a chance to pull a goal back right on half-time but striker Victoria Pickett, with only the goalkeeper to beat, pushed her effort wide after a swift counter-attack.

The contest was effectively over within six minutes of the restart as a rampant Japan scored twice more. Honoka Hayashi placed a shot home from the edge of the penalty area, before Hasegawa grabbed her second with the goal of the match. The No8 scored a wonderfully instinctive flicked finish with the inside of her foot, re-directing Ueno’s shot.

Substitute Hina Sugita completed the rout 15 minutes after entering the fray, sliding the ball home from near the penalty spot after a low cross from the right.