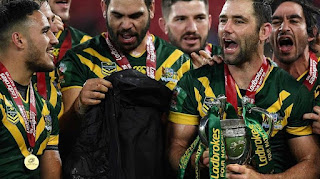 Australia produced a clinical display to blow New Zealand away 34-8 and deservedly win the Four Nations in front of 40,042 at Anfield.

Mal Meninga's team went through the tournament unbeaten - and in wrestling the title from the Kiwis reclaimed the world number one ranking.

With a quarter of the match gone, tries from Blake Ferguson, Josh Dugan and Trent Merrin plus a penalty from Johnathan Thurston gave the Kangaroos an unassailable 20-0 lead.

That was 24-0 by the break as the ruthless Australians added to their score when Dugan touched down a kick from Thurston.

Full-back Darius Boyd extinguished any hope of an unlikely comeback with a score shortly after the restart and although two tries from Jordan Kahu reduced the deficit, Australia's Boyd Cordner had the final word with a late score.

Aussies back on top

Australia coach Meninga is a Liverpool FC fan and must have been delighted with the ruthless performance from his team at Anfield.

Meninga had targeted reclaiming the world number one ranking during this tour and that never looked in doubt on a chilly Sunday afternoon when their opponents were simply unable to answer the questions asked of them.

The defending champions briefly rallied after Ferguson had touched down in the corner two minutes in and again for a period in the second half, but by and large Australia were utterly dominant.

Brilliantly marshalled by halves Thurston and Cooper Cronk and hooker Cameron Smith, they built pressure, dominated field position and looked a class above the only team to have come anywhere near them in this tournament, their group game at Coventry ending 14-8.

They targeted the defence of makeshift Kiwi half-back Tohu Harris, kicked penalties to extend their lead even when the game was surely already theirs and for most of the match showed a hunger and desire way beyond what the Kiwis possessed.

One year before the World Cup, it is difficult to see on the form they have shown in England how any other team can prevent them from retaining their title.

Plenty for Kidwell to consider

This competition was David Kidwell's first as coach of New Zealand - and aside from claiming his first win in their 17-16 victory over England, little has gone right for him or his team.

They were held to a draw by Scotland at Workington last week and at Anfield looked some way short of producing the sort of mercurial, against-the-odds performance that saw them win the Four Nations in 2014.

New Zealand have now lost four times to Australia in 2016 - once in Stephen Kearney's last game in charge and three times under Kidwell.

There has been some speculation in the Kiwi press that Kidwell would benefit from a coaching mentor and right now there is plenty for him to think about.

Shaun Johnson showed glimpses of the brilliance he possesses during the tournament but plus points were at a premium.

New Zealand's poor record in England continues - they lost a Test series against England in 2015 and have not won a Tri-Nations or Four Nations over here - and they will need to vastly improve if they want to threaten at the World Cup.

How they lined up