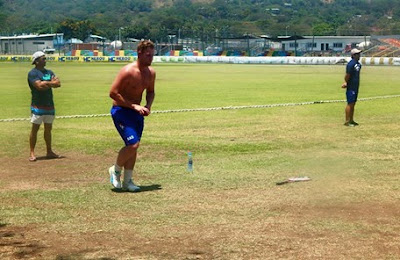 A tough assignment is on hand for Namibia ahead of the four days ICC Intercontinental Cup in Port Moresby’s Amini Park.

The Namibian’s have struggled in recent matches including a home ground loss to Saudi Arabia in an international friendly match last month and recently being crushed by Western Province in the Cricket South Africa series last weekend.
Their experienced campaigners like Gerrie Snyman, Nicolaas Scholtz, Craig Williams, and Sarel Burger have all made some telling contributions in recent matches but the younger players led by the likes of, Zhivago Groenewaldt, JP Kotze, JJ Smit, and Zane Green will have to step against the Hebou PNG Barramundis who have come off a terrific tour of the South Australian Cricket Association (SACA).
Operation Manager for Cricket PNG, Gayan Loku said the Barramundis had a great preparation leading up to this historic match against Namibia.
“The boys just lost one match to Tasmania in the SACA League but they were excellent in all other matches as they prepared themselves for this one” said Mr Loku.
Namibia will also play two matches against PNG in the World Cricket League Championships (WCLC) series which they are also struggling and are currently second last on two points with only one win from six matches.
The Hebou PNG Barramundis on the other hand are fourth on the eight-team log on eight points and four wins from their six matches.
Beating Nepal twice and Kenya twice but losing both their matches against the Netherlands.
The Netherlands currently lead the log on 12 points, followed by Scotland on 11 and Hong Kong on nine points.
It will be the first time for CPNG to host an ICUP in Papua New Guinea (PNG) and it will be the second time that WCLC matches will be held in PNG after the HEBOU PNG Barramundis defeated Kenya 2-0 in May.
“Cricket PNG (CPNG) is very happy to be hosting the event and entry is free and we are encouraging everyone to come down to Amini Park and witness some great cricket from some of PNG’s great players” said Mr Gayan Loku
PICTURE: Namibians going through their paces last hit out at the Amini Park Nets.