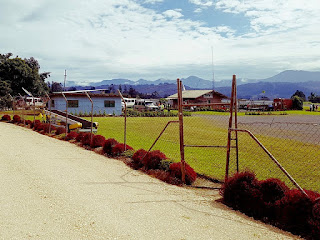 An elderly man from Tari in the Hela province was chopped to death by some youths yesterday morning near Tari town.

According to Inspector Kenzly Silas from the Tari Police station, the deceased was on his way to Tari town when he was attacked by two youths as a payback killing from a fight that happened previously in the Hoiyabia area of the Tari Pori Electorate.
“His head was sliced off with a bush knife or axe and he also sustained knife wounds from other parts of his body” said Inspector Silas

The police have negotiated to apprehend the suspects however, both men have fled the area and the suspect’s father has handed himself over to police to avoid more killing.
Meanwhile Police just received reports this morning that the suspects are on location planning another attack.

“I was just informed that the main suspects have mobilised with their other counterparts and have threaten to do more harm, so I sent two police units into the area to monitor the situation on ground”
Inspector Silas said there is also a primary school nearby where the fighting took place and the police are making sure that nothing happens to disturb the grade 8 students who are currently sitting for their National Examination. PNGFM
SHARE THIS
Share it Tweet Share it Share it Pin it