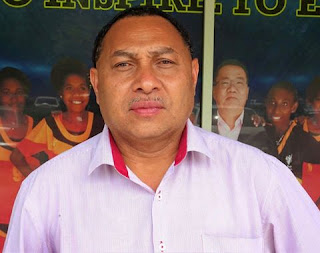 He said it was an effort to bring changes to the management of the national team as the PNGFA embark on its ambitious roadmap to get PNG to the FIFA World Cup.
“Mr. Ealedona has been assisting the National Team and his efforts together with many otherfootball friends including the PNG Football Supporters Club and support from the Prime Minister and the government saw Papua New Guinea make it into the recent OFC championships finals narrowly losing to New Zealand in a penalty shoot -out but importantly qualifying PNG to a historic FIFA World Cup 2018 OFC qualifying rounds.”
Mr. Chung says Mr. Ealedona will bring his managerial, corporate and public affairs networking and skills to the benefit of the management of the National team and our planning process as we embark on this exciting FIFA World Cup run.

The President said as the Head of Delegation, Mr. Ealedona working closely with the National Coach Fleming Serritslav and the team management and the PNGFA prepare our team for the Home and Away games against Tahiti in March 2017 and later the Solomon Islands.
The winner of this pool will play the winner of the pool consisting New Zealand, New Caledonia and Fiji of which the winner will play the fifth place of the CONCACAF (South America) to enter the prestigious FIFA World Cup Russia 2018.

Mr. Chung said with the success of PNG at the recent OFC Championships and with a quality coach in Flemming Seritslav and good government and corporate support, the road map to the World Cup whether in 2018 or in future is not a dream but something we can chart and plan forward for.
“This is a historic run for a place in the FIFA World Cup. I urge for strong support from the Government and Corporate sector. PNG is hosting the FIFA U20 Women’s World Cup in November and next year we will host two OFC FIFA qualifying games and hopefully to top our pool and play off with the winner of other pool.”
Meanwhile Mr. Chung announced PNG will play a friendly against Malaysia in Kuala Lumper on the 14th November and hopes to secure one or two more friendlies with other countries while in the region.
SHARE THIS
Share it Tweet Share it Share it Pin it