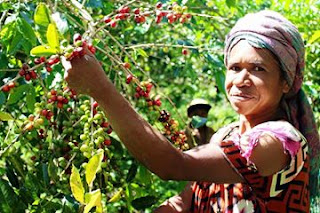 A nationally owned and operated coffee exporting company based in the Jiwaka Province has successfully made its first shipment to South Korea. For Kosem Limited this is its first overseas consignment. Kosem Ltd is one of the lead partners selected for the Highlands region which has taken the initiative to ship out green beans on behalf of local small holder coffee farmers. A total of 320 green beans bags weighing 60kg each were shipped out last weekend. This is the first time for local farmers in Jiwaka to ship their green beans direct to an overseas market and all credit goes to Kosem for sacrificing and taking the initiative.

The local farmers gave their parchments to Kosem which in turn processes them into green beans packed and shipped. Kosem Ltd is working closely in partnership with Productive Partnership in Agriculture Project funded by the World Bank and the Government of PNG to improve the livelihoods of small coffee farmers in villages to increase direct income. It helps increase production and produce better quality coffee for the farmers. At the launch of the first shipment held at Banz last weekend Kosem managing director John Munnul said Jiwaka was a coffee province and urged the people to grow more because of its economic potential. Mr Munnul said coffee was unique because it earned money for people at the village level.

He said most coffee was wasted because people wanted fast money and sold their cherries on the streets which was a total waste. Mr Munnul said they were centralising production at the village level to ensure farmers improved to grow more coffee and provide quality. He said group marketing was a very good concept because it guaranteed collective earnings. CIC chief executive officer Charles Dambui praised Kosem saying it put Jiwaka on the map. Mr Dambui said Jiwaka was the first province in the Highlands region to ship green beans out to overseas markets, adding Jiwaka would also host a coffee forum at a later date. Post Courier/ ONE PNG
SHARE THIS
Share it Tweet Share it Share it Pin it