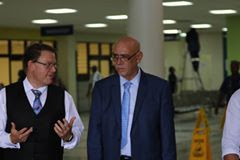 HEALTH Minister Michael Malabag says the funding cut to the Church Health Services (CHS) has been partly restored in the 2016 Supplementary Budget.

From the K50 million cut to the CHS budget earlier this year, the government through the supplementary budget has restored K20 million, but that is for wages alone for the remainder of this year.

"Only K20 million for the remainder of this year as wages component is going through the Health Department." Minister Malabag confirmed yesterday.

"I want the Key Economic Ministers to assure me that CHS will not be compromised including short falls Health is experiencing with payments of drugs and others." Minister Malabag said yesterday.

Mr Malabag in officially opening the 52nd annual PNG Medical Symposium in Alotau said CHS play a very important role in delivering health services, especially to the rural and remote settings, where the majority of the people live.

"The Government is committed to funding the Churches as well. However, with the severe economic situation affecting all sectors including health, the government, the public, and private including the churches, funding issues remain a challenge for some time into the future."

He said the recent cuts or short falls the churches are facing is an example of this situation which has now been addressed in the Supplementary Budget.

There have been concerns raised by Church Health Workers in the rural areas of PNG who have been working without pay for the past two months because of the budget cut.

The plight of the church health workers have also reached Parliament, when it was raised by Goilala MP William Samb who said the funding cuts had affected health service delivery in rural districts of the country.