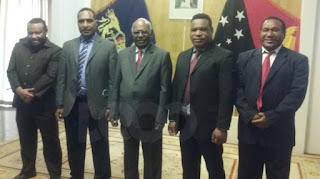 The National Government today signed a K99.4 million contract agreement to complete the road works on the highway that will link Southern Highlands and Gulf provinces.

Department of Works Secretary David Wereh who signed on behalf of the State said the missing link between Samberigi to Erave is expected to be completed next year.

He added that the highway when opened next year will be named after late Hela Governor Anderson Agiru who initiated the idea to connect the Highlands region to the coast when he was Southern Highlands Governor.