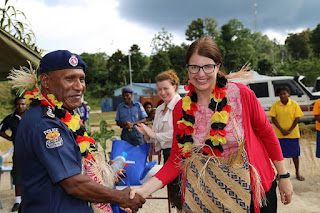 New law and justice facilities are on the way for communities in Manus, with construction of a Royal Papua New Guinea Constabulary (RPNGC) complex in Lorengau commencing this week.

In partnership with the Australian Government, the PGK15 million RPNGC Provincial Police Headquarters and Lorengau Police Station aims to increase access to law and justice services, and support police in making communities safer.
Deputy Governor, Honourable John Popot, speaking on behalf of Honourable Governor Charlie Benjamin, said at the ground-breaking ceremony: “This new police station will boost morale of police, and instil respect and appreciation from the public for police work in the province. It will support delivery of police services, and maintain law and order within our community, supporting Manus to grow in terms of business and development.”
Commissioner of Police, Mr. Gari Baki outlined his vision to those gathered for a modern, professional RPNGC, and encouraged all who use the new facility to take pride in their important role protecting and serving the Manus community.

Australian High Commission Minister-Counsellor Catherine Fitch said the Papua New Guinean and Australian governments, together with RPNGC, the Manus Provincial Administration, the law and justice sector, and the Manus community have worked together on this project since its inception.
“The progress we celebrate today is testament to the spirit of partnership, and I would like to thank all the stakeholders for their enthusiastic and continued support.
“The new Provincial Police Headquarters and Lorengau Police Station will serve Manus communities for many generations to come,” Minister-Counsellor Fitch said.