Arrest after Tongan shot dead in Sacramento, US 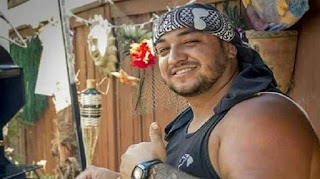 Shortly after midnight Monday, Chris Moran crawled out of bed to accompany his brother in dealing with a raucous party around the corner from the south Sacramento home they shared.

Within the hour, Moran found himself frantically using blankets and duct tape to try to stop the blood from escaping from the three holes in his brother’s chest.

Moran said he watched as Feinga was shot three times in the chest outside of their Valley Hi home on the 8300 block of Anton Way.

“They took such a beautiful person away from us,” said Moran, Feinga’s half-brother. Feinga worked with Moran at Feinga’s father’s contracting and roofing business. He was a father of two school-aged kids and recently started his own handyman business.

Moran, who lived at the duplex with his brother and his family, said on several occasions they sought law enforcement help to quell out-of-control parties. On July 16, he said they reported that gunfire stuck their home.

“We were finding shell cases everywhere,” Moran said of the previous incident. “They (the police) showed no interest in caring about the situation.”

Sometime after midnight on Monday, Moran said his sister-in-law woke him and said Feinga went to Garcia’s residence in an attempt to get a vehicle moved from his property. Moran said he joined his brother.

Feinga was successful in getting someone to move the car, but soon Garcia came out of the house with as many as 20 people and confronted Feinga. Over the still blaring music, the two exchanged words, Moran said. But when Feinga moved closer to hear what Garcia said, Moran said the teen pulled a gun and fired three times.

Garcia dropped the gun as Moran and Feinga gave chase, but within a few steps Moran said he noticed his brother was no longer by his side. Bleeding from the chest, Feinga made it back to his yard. Moran turned back, he said, and used a blanket and duct tape to try to stop the bleeding.

“He lost too much blood. He probably didn’t realize he was shot,” Moran said.

Matthew McPhail, a police spokesman, said officers were already en route in response to an anonymous noise complaint when the call was upgraded to shots fired.

McPhail said he didn’t immediately have information about previous calls for service related to the victim or suspect. When police arrived at 12:45 a.m. Monday, they found Feinga suffering from gunshot wounds. He was transported to a local hospital, where he was pronounced dead.

In a news release, police called the shooting a “tragic and unnecessary act of violence.”

McPhail said Garcia’s booking photo would not be released.