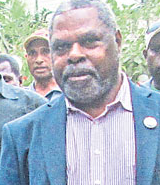 Western Governor Ati Wobiro and his two co-accused Norman May and Madowa Gumoi have been found guilty of conspiracy to defraud and misappropriation of about K7 million in public funds.
The guilty verdict was handed down yesterday at the Waigani National Court by Justice Martin Ipang before a packed courtroom.
Sentencing is expected at the end of next month although no specific date was given.
Justice Ipang said the court was satisfied beyond reasonable doubt that Wobiro, May and Gumoi conspired and dishonestly applied to their own use and the use of others the provincal support improvement programme funds worth K7,060,000.
The court ordered that their bail be revoked and they be remanded in custody pending a proper bail application.
Bomana prison commanding officer Superintendent Haraha Keko confirmed that Wobiro, May and Gumoi were remanded at the prison and were expected to return to court today for their bail application.
Their lawyer Justin Wohuinangu sad that the bail application would be based on Section 10 of the Bail Act, which related to bail after conviction but before sentence.
The court found that Wobiro, May and Gumoi conspired with each other and signed an “undated” memorandum of agreement to engage a charity organisation known as Fly Care Foundation to manage funds and provide services to the people and to make sure that approved projects were carried out in the province.
The court found that the agreement was illegal because no proper administrative process was complied with in signing it.
The court found that Wobiro, May and Gumoi knew each other “very well” when they signed the agreement.
Gumoi was the acting provincial administrator and May was the owner of the Fly Care Foundation.
Wobiro, in his capacity as the governor, directed four project cheques worth K7,060,000 to the foundation.
The court also found that the foundation was incapable of delivering the services mentioned in the agreement because it was not fully established considering that it was established in 2012 and offences were committed in 2013.
The court ruled against a submission provided by Wobiro, May and Gumoi that the projects stated in the agreement were approved in a joint district planning and budget priority committee meeting on March 23, 2013.
The court found that the meeting did not eventuate.
Parties will return at the end of August for submission on the sentence.
An urgent bail application for the three prisoners is expected to be moved today at the Waigani National Court.  The National / ONEPNG
SHARE THIS
Share it Tweet Share it Share it Pin it