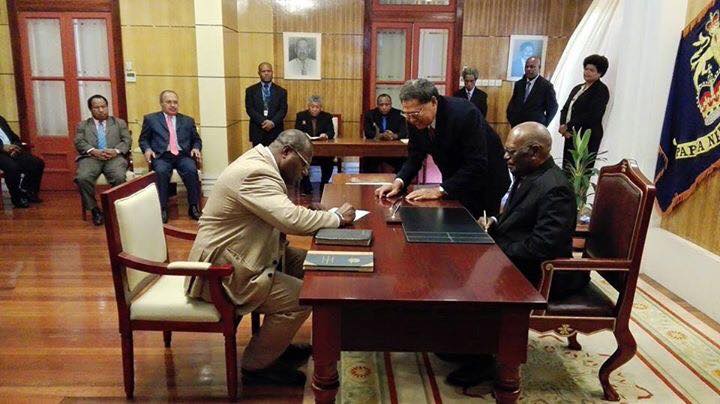 By PETER S. KINJAP
Member for Talasea Open Hon. Francis Marus is has been appointed as the new Minister for Higher Education, Research, Science and Technology. Mr. Marus was sworn in this afternoon by the Governor General Hon. Sir Michael Ogio at the Government House.
Prime Minister Peter O'NEILL when congratulating the new Minister said this now closes and completes the ministerial reshuffle by the government and they now stand ready to deliver to the people with the new ministers for the remaining nine (9) months before the national general election in 2017.
“This also brings stability to the government and stability is important at this time, especially for our investors,” he said.
Mr. Marus was part of the government coalition right after the elections even though going into the 2012 General Elections under Hon. Belden Namah's PNG Party banner. He was rewarded today with this new appointment.
Incumbent Minster for Higher Education Hon. Malakai Tabar has been moved to the Ministry of Transport while Transport Minister Nixon Duban has been appointed the new Petroleum and Energy Minister replacing Hon. Ben Micah who left during the Vote of No Confident eve in a bid to topple the O'Neill-Dion Government by joining forces with the Opposition. Member for Usino Bundi Hon. Anthony Yagama has been appointed the Deputy Minister for State Enterprise and he will be working with Minister William Duma.
Marus and Yagama both first time members.
The Vice Ministers for High Education Hon. Anton Yagama was also sworn in this afternoon at the same time.
Meanwhile, other new ministers sworn in this after following the cabinet reshuffle include member for Madang Nixon Duban as the new Petroleum and Energy Minister and Member for Gazelle as the new Minister for Transport.
SHARE THIS
Share it Tweet Share it Share it Pin it