PNG Government confident of defeating motion of no confidence 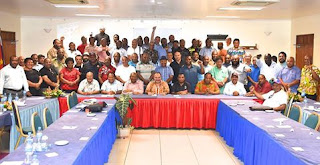 The Government, led by  Papua New Guinea Prime Minister Peter O’Neill, is confident they will defeat the vote of no-confidence in the Prime Minister in Parliament tomorrow.

“We are not a government that promised the moon, we promised reality for our people.”

This was the crux of the Government caucus that concluded an intensive day of review of the achievements it has made through the implementation of deliverables in the 2012 Alotau Accord which laid the foundation of the O’Neill government work plan.

The conclusion is the thrust of the Government faction now camping in Alotau, Milne Bay Province, awaiting Friday’s vote of no-confidence in the Prime Minister Peter O’Neill.

On Thursday,the side said more than 80 Members of Parliament were intact meeting in the birthplace of the Accord.

There O’Neill welcomed the commitment of the caucus to completing the work plan laid out in the Alotau Accord set following the 2012 election by the parties and members that went on to form government.

“The Alotau Accord is now an historic agreement in the history of our nation.

“This is the most forward thinking platform for any elected government in the history of Papua new Guinea.

“This document clearly identifies key priority areas that we need to advance in our country if we are to deliver real and tangible change for our communities.

“We promised the reality that we could deliver in education, healthcare, law and order and infrastructure, and we are delivering on what we promised.

“It is fulfilling to see that we have achieved close to 90 per cent of our commitments under the Alotau Accord and we will deliver a full report in this in the coming months,” O’Neill said.

Public Services Minister Sir Puka Temu highlighted the goodwill that underpinned the document under a government of reconciliation that has performed very well through political stability.

“Although some of our former PMs have left us to join the Opposition, we will continue to deliver services to our people until the 2017 elections.

“The coalition political parties set out from here in 2012 to deliver key services like free education, free health services, infrastructure development, law and order and economic development, and we have proven to our people by implementing our policies.

“This is the Government the people of Papua New Guinea will recognise to have delivered the fastest rate of development the nation has ever seen.

“We look forward to returning to Port Moresby this Friday and maintaining our position in government,” he said.

Opposition Leader Don Polye, said the Opposition number is moderately swelling as the D-Day for the vote of no-confidence approaches.

“We are confident with the support that we are receiving each day and our numbers are swelling on a moderate pace as the clock ticks towards Friday, on Tuesday our camp was graced with three former prime ministers and today a Government back bencher joined our group.”

“On behalf of the coalition leaders in the camp, I welcomed Obura-Wonenara MP Merra Minne Kipefa into the camp.

“He doesn’t represent an urban district but an isolated and remote area in the Eastern Highlands Province .

“A Government, which is in the making, will be formed by our people in the least developed areas. This new government is not just to develop Port Moresby only but to inclusively develop all the rural areas in the country.

This is not a government for Pacific Games only or for APEC or ACP meetings only,” he said.

He also extended his welcome to the Goilala MP William Samb, who is also from an isolated district, which has been neglected for a long time just like Obura-Wonenara.

“We have two highly qualified leaders but they represent their rural people of PNG. The new government will serve and deliver services to the neglected rural areas…not just only in towns and cities like the government has been doing.”

He commended the MP-elect for South Bougainville as upon his election he swiftly joined the Opposition.

“He joined this quality team to form a new government. It means all these leaders are not only principle-oriented but strong as well,” he said.