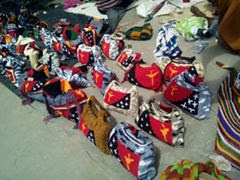 That’s the word by the NCD Market Division Manager Charlie PENGI when speaking to LEGENDFM News this morning.
“As you are aware Gordons Market is set to closed for upgrade and that’s when the Boroko Market will be reopened, Boroko market has a capacity of 700 so only half the vendors can sell at the market while the other half of vendors will have to utilise their local markets”, said Mr Pengi.
Vendors and market sellers are advised to utilize all other markets in the city for the time being. Further to this, the Boroko Market will now come under the ownership of NCDC too as the Central Provincial Govt has failed to ensure this market space was open for Central vendors.
Mr Pengi has encouraged Central growers and fishermen to utilize the Boroko market as NCDC will ensure no abuse of vendors will occur. PNGFM
SHARE THIS
Share it Tweet Share it Share it Pin it