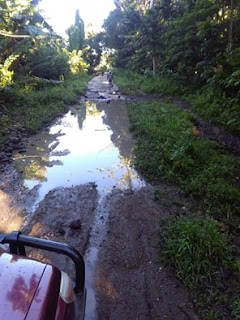 LOCAL communities in the west-coast Namatanai are crying foul over deteriorating road conditions in their area.


Large potholes with pools in them are causing the Public Motor Vehicles (PMVs) and the traveling public a lot to maintain on a daily basis.

Community leaders are now questioning the Namatanai District Administration through the then Joint District & Budget Priority Committee (JD&BPC) to honour its promise it made in 2010 to fix the bad roads.

“We are not happy. A lot of ground breaking ceremonies have been conducted in the past and the roads are still in their bad state of order. Our MP (Byron Chan) has promised to deliver good roads but up until now there’s nothing to show for,” they said.

The community leaders are now questioning the Namatanai MP to explain the K7 million that was approved by the then (JD&BPC) which he formally announced during the Kabanut Ambulance launching in 2010.
“Where has this money gone to? West-coast Namatanai had several ground breaking ceremonies at Borokalai junction with Nivani Constructions and many others. Why are these roads still looking like this? Didn’t the west coast Namatanai people voted you because you promised to fix our roads?” they queried.