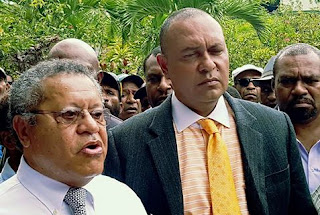 Parliament has been ordered to resume its sitting within 5 days of the decision handed down today by the Supreme Court.
A 3 men bench headed by the Chief Justice Sir Salamoa Injia, Deputy Chief Justice Gibbs Salika and Justice Collin Makail ruled that the 5 days given for parliament to resume begins today and Speaker must reconvene parliament as a matter of national importance and urgency.

The Supreme Court granted the application by the Opposition Leader Don Polye on grounds that Deputy Speaker of Parliament Aide Ganasi adjourned the sitting prematurely to August 02 without informing the house of a no confidence motion before parliament which had to be tabled.
The Court also found that after service of the motion of no confidence by the Opposition, the Deputy Speaker, as Chairman of the Private Members Committee failed to convene a meeting to deal with the motion for the motion to be debated on the floor.
SHARE THIS
Share it Tweet Share it Share it Pin it