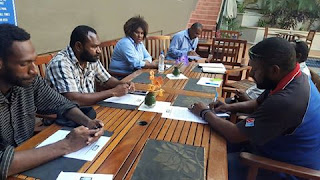 FOCUS GULF (PNG) Incorporated, a Community Based Monitoring group from the Gulf Province has raised calls on the three members from the province to unite before the Vote of No Confidence. In a media conference in Port Moresby the Chairlady of the MasoOakiva-Rakasaid the three MPs from the province must set aside their personal differences and unite in the best interest of the people of Gulf Province on the eve of the Vote of No Confidence in the Government of Prime Minister Peter O’Neill.


“We appeal to Governor HavilaKavo, Mark Maipakai member for Kikori and Richard Mendani Member for Kerema to put aside differences and make a bold decision on the floor of parliament, regardless of party affiliations, political interest and all the inducements being offered through political horse-trading that is taking place,” said MasoRaka.

Gulf Province is by far the least developed province in the country and they called on their leaders to be determined to make a big statement on the floor of parliament on leadership which was lacking in the past which has cost many lives of people back in the province. “As we speak, a family is mourning a loved one they have lost while travelling by banana boats at sea. In the mountains, women are giving birth in the bushes because of lack of health services” Raka said.Education Infrastructures around the province have deteriorated to the point there are very few graduates from high school making it to universities and further studies making this as one of the worst performing governments in the history of this country.

Schools are closed because there are no teachers, not houses, no classrooms and teachers are often running after their salaries in Port Moresby because they cannot access banking services in the province which must be a turning point for the province.
Up in the higher remote mountainous areas of Kotidanga and Kaintiba aid posts are closed because of no medicine due to closure of airstrips no access to road and medical orderlies are living like ordinary villages because of lack of health supplies or because of fortnightly pay issues and there are no roads. Project funds are misused by corrupt bureaucrats in Waigani and the breakdown of basic services in the province. Patron of the group Jim Taparu also reiterated calls for the three members to change for the better.

“Gulf province is one of the least developed provinces, yet we are rich in natural resources. Over the years through many successive governments, we have seen very little impact from the harvest of our resources – our forest timber, our fisheries and marine resources. Currently we are fighting a David and Goliath battle in pushing our agenda for the second LNG harvest from our Elk and Antelope fields to be processed and exported out of Gulf Province,” said Taparu

Focus Gulf PNG incorporated feel the responsibility to rise up and speak for our people everywhere but most importantly for the majority of our people back at home.

Taparu said the key message was for the three leaders to unite and be neutral to make the change for the better. In their closing remarks called on the incoming government to consider Governor Kavoas a senior member of the PNC party to be considered one of the ministerial portfolio as a third term politician considering the second LNG be built in his province to see the second LNG project set up in Gulf province with spin off benefits for the resource owners in the province.
The final call to the three MPs “please make a bold stand now and make a united move”
SHARE THIS
Share it Tweet Share it Share it Pin it