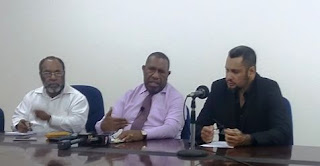 With the current issue on the rise of Multi Drug Resistant TB (MDRTB) in PNG, a report into Mabudawan Health Centre in Daru showed findings of no BCG Vaccine to protect children from TB, no funds for rural visits to administer BCG Vaccine, No effective protection for medial staff treating MDRTB and no follow up of TB patients leading to rise of MDRTB. To add to this the funds are yet to be provided for the Stage 1 program as per the NEC decision on the K1.8 million for TB.
As rural health centres face its challenges the Cancer treatment facility with its lack of cobalt to treat cancer patients in Lae persists adding to lives that can be saved lost, this and other issues in the Health Sector drove the Parliamentary Committee to set about preparing an interim report on Health Sector Management highlighting an excess of managerial problems that needs to be addressed as a matter of urgency.

“The report on Health Care Sector in the country shows that there is apathy in the way things are done with a lack of concern which shows that the countries health system is in disarray as there are issues with the health services in rural areas, these reports have been listed on the Parliament Notice Paper several times but each time Parliament either goes into recess or the reports are removed from the paper, The Special Parliamentary Committee is a creature of Parliament mandated by the Parliament and designed to keep it in check and we speak for the 7 million people of the country as their voice in Parliament and these reports are in no way done to discredit the Government but rather to assist in helping and being the solution to where change and improvement can be brought about to improve Government services ”, said Chairman of the Special Parliamentary Committee Bire Kimisopa. PNGFM
SHARE THIS
Share it Tweet Share it Share it Pin it