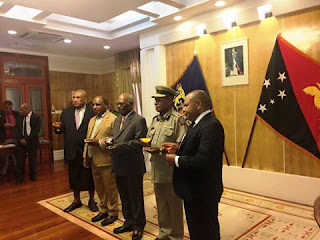 The two were encouraged and challenged to deliver what is required of them as leaders.
Upon his appointment, Administrator Bando said he will be refocusing his priorities on the challenges faced in the province following the recent passing of Hela Governor Anderson Agiru.

Bando was thankful to the O’Neill Government for the appointment and assured the people of Hela that he will be working with all the provincial leaders for a better Hela Province.
CS Commissioner Michael Waipo also acknowledged his the government for his official appointment as the Correctional Service Commissioner saying the Correctional Service had a lot of outstanding projects and CS will be looking at implementing them within the 10 months period before the 2017 General Elections.

He said he will continue to deliver services to all CS facilities all around the country along with the establishment of the CS facility in Hela which is a priority now following the appointment of the new Provincial Administrator.
“This is to improve and maintain the Law Chain in Hela Province as well as other Provinces,” he said.
Tari Pori MP and Finance Minister James Marape also encouraged Mr Bando and Waipo to deliver services in both their respective roles as Commissioner and Provincial Administrator.
Mr Marape called on Mr Bando to value and assemble all public servants in Hela and the Hela Provincial Assembly prior to the his Official Announcement as PA in Hela next week.
Mr. Marape also revealed that the closing of the Hauskrai program for Late Governor Anderson Agiru will be announced when the Hela Provincial Assembly resumes next week.
PNGFM News/Photo
SHARE THIS
Share it Tweet Share it Share it Pin it