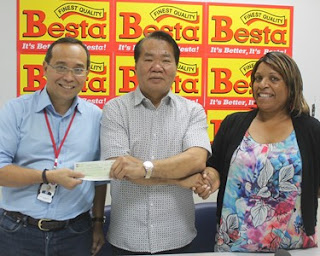 THE Papua New Guinea Football Association (PNGFA) is pleased to announce International Food Corporation (IFC) as the sponsors of the men's friendly tournament between PNG and Malaysia's soccer men's team today at the Sir John Guise Stadium.IFC, the producers of the Besta product has over the years supported PNGFA through the sponsorship of the annual Besta FA Cup and the Besta Youth Development program through the National Soccer League.

IFC sales and marketing manager, Roslan Wahed when handing over the cheque of K16, 000 said IFC was proud to sponsor this historic event that inspires grassroots soccer in PNG.

"Soccer has really developed over the years and IFC would like to congratulate Mr. Chung and his team for increasing the popularity of soccer in PNG through the recent OFC Nations Cup as well as the hosting of the FIFA U-20 Women's World Cup tournament to be held in November," Wahed said.

PNG Football Association president, David Chung when receiving the cheque said he was grateful for the continuous support of IFC and it was such support from corporate organisations that assisted in developing football in the country.

"Our partnership with IFC through the Besta Youth Development program has resulted in the nurturing of successful players that are in the PNG men's team.

In fact, six of the players in the PNG men's team came out of the Besta Youth Development program," Chung said.

Following a successful run by the national team who made it into the grand-final play0off at the recent concluded OFC Nations Cup, the team now commences a journey towards Russia 2018 qualifications.