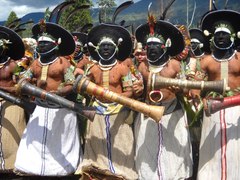 Australian tourists will receive visa on arrival, a decision announced by Minister for Tourism Arts and Culture Tobias Kulang..

This decision stems from Prime Minister Peter O’Neill’s earlier decision to withdraw Australia Visa on arrival he announced in an earlier ministerial meeting at the press club in Sydney.

“It is an impediment to attracting tourists in the country which I want to advice the Prime Minister that we will withdraw our position and reinstate visa on arrival for our Australian friends when they arrive at Jackson’s international terminal,” Minister Kulang said while officiating at the official launch of the 2016 Calendar guide book for tourist at the Owers Corner  last Friday.

He said the Prime Minister has taken that Government decision and initiative however this twist of decision was made in the best interest for the tourism industry in the country.

The Minister said the decision will be brought before the cabinet in the next mid-session of Parliament to be endorsed and will formally go through normal process to have Visa on arrival effective.

He said the number of tourist entering the country have reduced from 5000 to 3000 last year and urged that by reinstating the decision will have an impact to attracting more tourist into the country to boost the tourism industry and the GDP growth of the country as well.