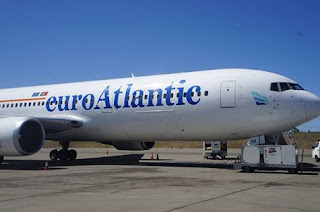 AIR Niugini is leasing a Boeing 767-300 series aircraft from an European airliner while two of its Boeing 767 aircrafts are undergoing maintenances.
The company said in a statement that the Euroatlantic Airways Boeing 767-300 arrived in the country on Monday from Portugal to fly the routes the Air Niugini aircraft normally operate on. “Air Niugini wishes to advise the travelling public that the airline’s two Boeing 767 aircraft would be undergoing their scheduled maintenance overseas – effective May 12, 2016,” the statement said.
“The aircraft is under the wet lease arrangement where the pilots, engineers and senior cabin crew on board are from Euroatlantic while the rest of the cabin crew are from Air Niugini.”
The statement said the aircraft would be operating on the Brisbane and Singapore routes while .
It said the lease period was for two months. The aircraft returns in mid-July.
Euroatlantic was one of the top providers of wet-lease aircraft arrangement with a large fleet of Boeing 777, 767, 737 and is fully certified IATA/IOSA and EU regulations.
Their major clients from around the world leading airlines including British Airways, Etihad and France/KLM, who leases it airlines to operate on their routes.
SHARE THIS
Share it Tweet Share it Share it Pin it