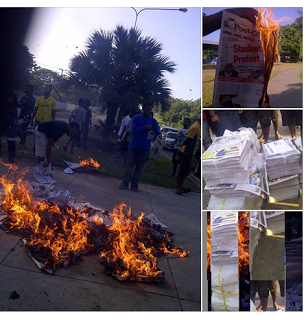 The current protest at the University of PNG turns ugly, when students attacked media by burning the country's two major daily news papers this morning.
Disgruntle students at the Waigani Campus bus stop confiscated the National News Paper and the Post Courier from the distributors and literally burnt them to ash.
The students burnt about 600 papers from the National and 200 from the Post Courier.
The students said their actions is to show their frustrations on the media for NOT reporting facts surrounding their protests.
They said the media particularly the two dailies have been bias in their reporting.
The students told NBC news, they are not only fighting for themselves, rather they are fighting for the future and good of this country, but media is deviating from the core issues the students are protesting against.
However, the two dailies told NBC news, they are only messengers and they report on information's provided to them.
Editor of Post Courier Todagia Kelola said media only plays their role in disseminating the information's and such actions by the intellectual is uncalled for.
A spokes person from the National News Paper said, If the students have issues with the government of the day, they should strive to resolve them through peaceful means.
Burning newspapers is certainly not one of them, as media are only the messengers.
The spokes persons further said, if they consider themselves to be future leaders, they should show PNG they can act rationally and responsibly.
The student this week held a sit-in protest with a three points petition, calling on Prime Minister Peter ONeill to receive their petition in person at the Waigani campus.
The petition calls for Prime Minister Peter O'Neill and Police Commissioner Gari Baki to step down from office, and for suspended investigators of the National Fraud and Anti-Corruption Directorate, to be reinstated.
But, Prime Minister Peter ONeill failed to receive their petition, and instead, sent a team of government Ministers, which the student refused to hand them their petition.