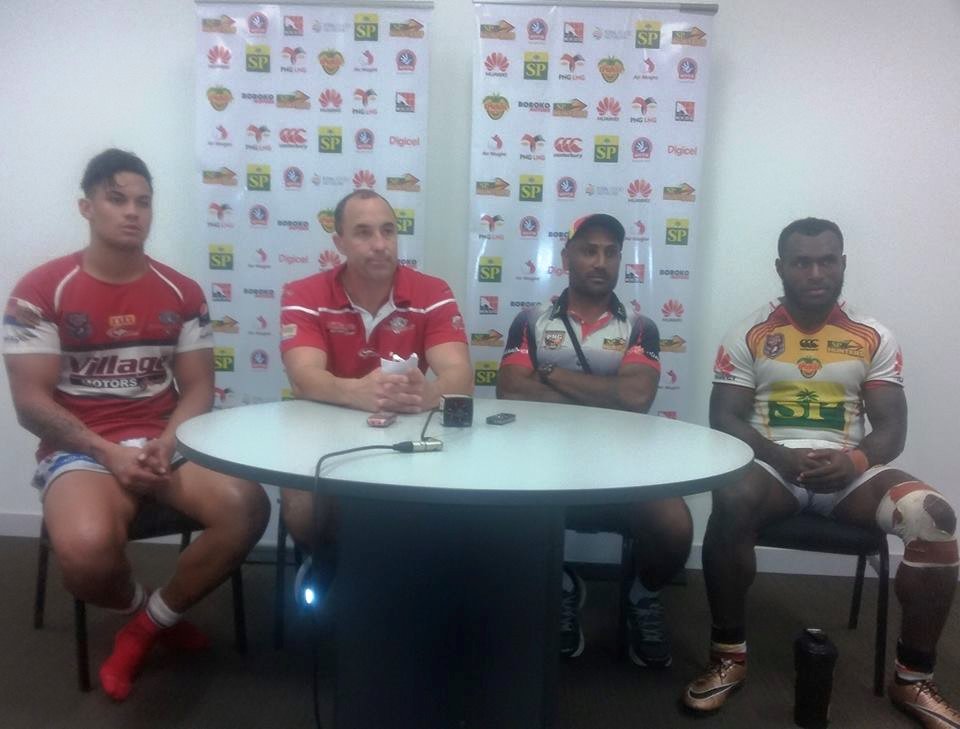 The SP PNG Hunters retained the Stan Joyce Cup for the third time with a tough 22-18 win over the Redcliffe Dolphins in Port Moresby.
In bright sunshine at the National Football Stadium (NFS), the 42nd placed Dolphins started the first half with determination, however Stargrowth Amean opened the scoring in the 4th minute with a try that was converted by Co-Captain Noel Zemming. The Dolphins levelled the match a few minutes later with a try to interchange forward Ruzon Nutira which saw both teams head to the half-time sheds dead locked at 6-6.
The Hunters broke the dead lock in the second half on the 50th minute when attacking 10 meters out, a beautiful inside ball from half back Watson Boaz to Adex Wera who switched from the left wing to play fullback sent the custodian to the try line to give the Hunters a 10-6 lead with Zemming adding the extras.
Four minutes later in the 54th minute Zemming added a piece of individual brilliance by bamboozling 5 Dolphin defenders with his footwork 20 meters out with only the Dolphins fullback Luke Capewell to beat a step of the left foot and some contact saw the Hunters Co-Captain run in for a try to extend the Hunters lead to 16-6, however he failed to convert the extras.
With 19 minutes left in the match, the short turnaround from the ANZAC match started taking its toll on the Hunters players, as they continually struggled to get on side in each set. The undeterred Dolphins side took advantage and showed why they are premiership contenders, with Ruzon Nutira grabbing his second try of the match with a barn storming run close to the line leaving two Hunters sprawling in his wake. Capewell added the extras for a 16-12 score line.
Putting a disappointing week behind him after being left out of the PNG Kumuls side for the May 7 test match against the Fiji Bati’s, Zemming stepped up with 6 minutes left when he charged down and regathered all in the one motion an attacking kick from Dolphins half back Darren Nicholls resulting in a 60 meters runaway try, and after adding the extras Zemming extended the Hunters lead to 22-12.
The determined Dolphins hit back from the restart finding the touch line from the restart winning them the head and feed 20 meters out on the ensuing play a planned move on the fourth tackle by Dolphins half back Nicholls saw him kick for his fullback Capewell who touched down at the corner. Capewell converted his own try and the match ended with the Hunters holding on to win 22-18
“I want to thank the Redcliff Dolphins for a great match, unfortunately there has to be only one winner and I am thankful to all the boys for a job well done”, said Zemming after being name the man of the match honour.
The win sees the Hunters cement second spot in the Intrust Super Cup ladder with most of the Hunters players now going into camp for the PNG Kumuls.