PNG Hunters bounce back with a win over Mackay Cutters 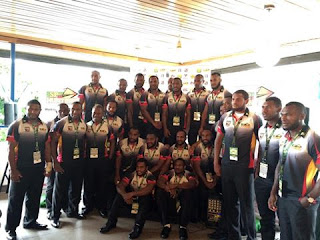 The  Papua New Guinea SP Hunters have hit-back with a gutsy 34-20 win over the Mackay Cutters.

The game was dominated bay both forward packs who relentlessly went at each other with Esau Siune and Henry Wan playing dominant roles in the middle.

The Cutters were first to score five minutes into the game through Johnny Faletogao'I but with unsuccessful conversion, they took the early lead 4 - 0.  The Hunters replied with a try through Watson Boas after a break by fullback Stargrot Amean who flipped the ball to Boas who  scored under the uprights. Zeming added the extras and the Hunters took over the lead 6 - 4.

The home side replied with  back-to-back tries  to extend the lead to 16 - 6.


The Hunters muscled up and scored through  Enoch Maki who burst through the Cutters defence line to score under the uprights. Zeming  added the extras to reduce the margin to 16 - 12 at half time.

In in the second half, the Hunters were first to score through stand-in halfback Puara that leveled the score at 16 - 16 all.

The Hunters found the Cutters line again through Baikawa on debut to extend the lead to 22 - 16  with successful conversion from Zeming.

Boas scored his second 60 minutes into the game with a runaway try, followed by a successful conversion to put the Hunters in a 12-point lead, 28-16.

The home side muscled up and  scored again through Brenden Treston taking their score up 28-20. The Cutters threw everything on the Hunters both in defence and attack but the Hunters held on.

Wera finally scored for the visitors to sealed the game  34 - 20.