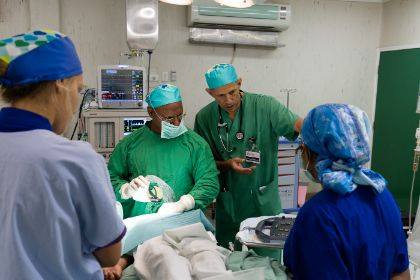 The PNG Operation Open Heart 2016 has started this month at the Port Moresby General Hospital with 19 volunteers from Australian Open Heart led by team coordinator Dr. Russell Lee and Dr. Mathew Crawford the team leader for Intensive Care; are already here in the country to start the February Open Heart for Paediatrics in the country.
During a press conference held on Friday at the Port Moresby General Hospital saw the local team of doctors and nurses along with the international volunteers confirming that for this year there will be four separate trips taking place in February, July, June and November. With two teams visiting one from Australia Open Heart will see a team of nineteen doctors/nurses and cardiothoracic team of six from Singapore.
The PNG Operation Open Heart have been an ongoing event for the past 23 years with about 994 patents with successful operations and treatments which see about 1/3 of them been children, as for this month saw 10 successful operations done and patents with stable conditions now undergoing treatments.
Cardiothoracic Surgeon in PNG and based at the Port Moresby General Hospital Noah Tapaua says that this program have been successful because of the involvement in training from surgery procedure, treatment and after operation patent care that the 18 dedicated local staff have given to this project with training from the Australian Open Heart team.
SHARE THIS
Share it Tweet Share it Share it Pin it