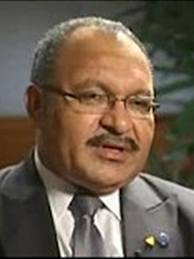 A TRIAL on the validity of Prime Minister Peter O’Neill’s arrest warrant has been held pending the determination of an appeal challenging the joinder of the heads of the National Fraud and Anti-Corruption Directorate as defendants to the case.
This follows a decision made by sole judge Justice Sir Bernard Sakora in Waigani yesterday to grant leave for O’Neill to challenge a National Court decision to join Matthew Damaru and Timothy Gitua as defendants to the case.
Sir Bernard granted leave to appeal and stay of the trial in the National Court after he was satisfied that O’Neill had arguable grounds for determination at the Supreme Court.
He said the grounds of appeal were raised with the support of court principles and they were not trivial or vexatious.
Sir Bernard said it was only proper that the trial in the National Court be stayed when the parties were subject to an appeal in a higher court.
The grounds of the appeal raised by O’Neill include jurisdictional issues among others.
Lawyer Mal Varitimos QC, representing O’Neill during submission, told the court that there was error in law by the judge’s decision to join Damaru and Gitua to the case.
Varitimos said the warrant issued by the District Court was done without the authority of the then Police Commissioner Geoffrey Vaki.
Lawyer Greg Egan, representing Damaru and Gitua, argued that it was open for any member of the police force to execute a warrant of arrest.
O’Neill filed the appeal after the National Court in Dec 7 granted orders for Damaru and Gitua to be joined as third defendants to the judicial review case.
Parties later appeared for mention in Feb and the court scheduled the matter for trial on March 3.
The judicial review case was started last July by O’Neill and Vaki, seeking the court to review the decision by Chief Magistrate Nerrie Eliakim to issue the warrant. The National / ONE PNG
SHARE THIS
Share it Tweet Share it Share it Pin it