PM O’Neill Briefed on Disaster Recovery in the country 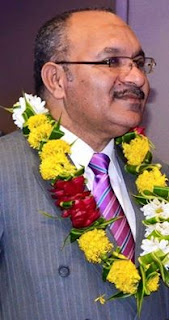 The Prime Minister, Peter O’Neill  has been brought up to date with current recovery activities underway following drought and heavy rains in various parts of the country.
PM O’Neill said more than 25 million Kina has been spent by the national Government on recovery efforts since the drought situation worsened.
“The drought that has affected parts of the country has been severe and impacted on millions of people,” the Prime Minister said.
“Our Government has worked to deliver relief direct to where it is needed, and ensured it was not held up by bureaucracy.
“This has included the provision of food supplies and seeds, as well as the restoration of Government services affected by extreme weather.
“There have been roads that were washed out by recent rains in the Highlands, and the Works Department has been working solidly to have repairs made as quick as is possible.”
The Prime Minister said as with the damage caused by serious weather in other areas around the Pacific, Papua New Guinea must be prepared for ongoing weather events made worse by climate change.
“Papua New Guinea is well known as the land of the unexpected, and we are experiencing extremes of weather around our country.
“The Government will continue to make the recovery after disasters and the restoration of basic services a priority for our people.
“In upcoming budget projections we will continue to increase our allocation for dealing with climate induced weather events.”
SHARE THIS
Share it Tweet Share it Share it Pin it