Marum tipped to be next PNG Kumuls coach 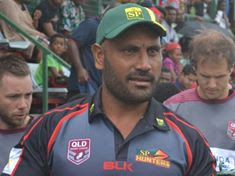 PAPUA New Guinea Hunters coach Michael Marum is tipped to be the new Kumuls  coach, according to a reliable source in the PNG Rugby Football League.

The position was left vacant last year after Kumuls coach Mal Meninga was signed on by the Australian Rugby League to be the Kangaroos coach.
The Kumuls coaching contract is for a three-year term, meaning Marum will take the team to the 2017 World Cup.
Marum, 42, has an impressive resume having been a former Kumul (2000-2001) and being assistant to three previous coaches in Bob Bennett (1996-2005, Marum retired from playing in 2001 and assisted Bennett from 2002-2005), Adrian Lam (2007-2013) and Meninga (2014-2015).
Marum has had success coaching at the inter-city cup level, having won multiple titles with the Rabaul Gurias (2003, 2005, 2009 and 2012).
The East New Briton holds an Australia Rugby League Level 2 senior club coach (SCC) certificate.
The source said the appointment of Marum was based on merit, with his success as a coach over the over a decade with the Gurias and now the Hunters and was easily the country’s most accredited coach, having served an apprenticeship that started in 2002.
Marum was named the Queensland rugby League’s Intrust Super Cup coach-of-the-year in 2015, beating out other top contenders in Kristian Woolf (Townsville Blackhawks) and the Walkers brothers, Shane and Ben (Ipswich Jets).
His three-year contract with the Hunters expires at the end of this season but Marum is expected to renew it — given the Kumuls coaching job only sees the national side play once a year.
The National was unable to get comments from Marum due to the Hunters media ban on players and staff for the two weeks leading up to the opening round of the Q-Cup.
However from previous interviews, the Hunters mentor said he was focused on the Hunters in 2016 but would accept the challenge of preparing the Kumuls for the one-off Pacific Test against the Fiji Bati at Pirtek Stadium, Parramatta, Sydney, in May. The National / ONE PNG
SHARE THIS
Share it Tweet Share it Share it Pin it