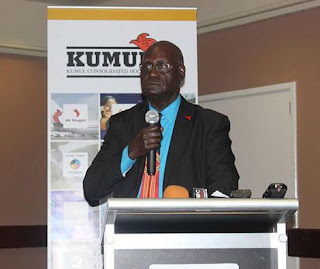 Since revelations of structural defects were discovered on Phase One of the Lae Port Tidal Basin Project, Kumul Consolidated Holdings, KCH, has since gone on the defence, alluding to ongoing construction efforts within contractual arrangements between the State and China Harbour Engineering Company (CHEC).
The construction of Phase One cost taxpayers K809 million.
The defects received much criticism from Opposition Leader, Don Polye who branded the work by CHEC, as substandard and queried why Kumul Consolidated awarded Phase Two to the same contractor.
Today in response, KCH Chairman, Paul Nerau exclusively told PNG TV Live, the contractual obligation to rectify the defects lies with CHEC.
“I’m not going react to that, but that’s his (Mr. Polye) prerogative to express his opinion.”
“I think the reality of what we are dealing with is that this contract was awarded without us knowing about the defects so now that we have the defects, we are working with contractor to sort it out,” said Mr. Nerau.
As reported by a local daily, KCH said its consultant, AECOM had identified the defects concerning the integrity of the sea wall slope protection.
“We’ve done due diligence to the issue by contracting an international professional company AECOM) and we’ve established the defects - they (CHEC) will simply comply by contractual arrangements and everything will be fixed – it is normal contractual obligations that they need to comply with them,” said Mr. Nerau.
Mr. Nerau concluded saying he is confident of the contractor will build a world-class sea port in the conclusion of the Lae Port Tidal Basin Project, which is primed to be the biggest sea port in the Region.
Photo Caption: Kumul Consolidated Holdings Chairman, Paul Nerau speaking at official handover ceremony of State Investments and Public Enterpises ministerial portfolio from Member for Kavieng Open, Ben Micah to Member for Hagen Open, William Duma.