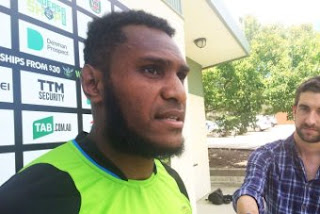 One of the NRL's most unlikely and unique recruiting moves is complete, with the Raiders signing former Papua New Guinea volleyball representative Kato Ottio to a two-year deal.

The 21-year-old had not played rugby league at any level until two years ago, when he was spotted playing volleyball by the PNG Hunters, who compete in the QRL Super Cup.

After catching the eye of the Raiders recruiting staff while playing for the Hunters, Ottio was then signed to a training contract with Canberra over the 2015/16 off season.

Ottio again impressed in the Auckland Nines competition early this month, proving a key threat in attack, and has now been offered a two-year deal to stay in Canberra.

It caps a remarkable journey for Ottio, who has now set his sights on an NRL first grade debut, and financially supporting his family back in PNG.

"My first goal is to play in the top grade, and to buy my mum a house," he said.

"I'm a village boy, a local boy, I only grew up with my mum. My dad passed away when I was 14, and my mum means the world to me.

"She looked after me when I was a kid, and I'm so grateful, so I want to work hard while I'm here and make the most out of every opportunity."

But Ottio said he knows he has only just started his journey to a spot in the back row in the Raiders first grade side.

"When the Raiders called me up for the train and try [contract], it was a great opportunity for me, [but] I've still got a lot more to do, and I will fight for it until I get it."

Raiders football manager John Bonasera said the club had been impressed by Ottio's work ethic since arriving in Canberra.

"From the minute he arrived he put in a determined effort and met all of our expectations and we believe he has great potential for growth," he said.

"Kato displays a strong set of values and a willingness to work hard in order to succeed."

Ottio will be looking to follow in the footsteps of other PNG-born NRL stars, including Adrian Lam and Neville Costigan.