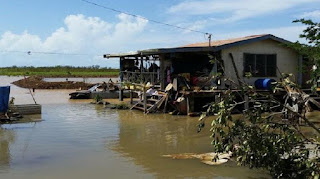 The death toll in Fiji from Cyclone Winston has risen to 29, and one island has been nearly flattened, the Fijian government says.

Mr Perrin said 2000 families lived on the island "and it has been pretty much flattened. There are very few buildings left".

Two vessels carrying medical aid, food and water were expected to arrive at Koro this morning, he said.

More than 8000 people remain in hundreds of evacuation centres throughout the Fijian islands, and thousands throughout the 300 islands of the archipelago would be displaced for months, he said.

As well, the death toll was expected to continue rising.

Radio New Zealand International reporter Alex Perrotet, who is in Nadi, said a water shortage and shelter were the most pressing concerns as Fijians started to rebuild their homes.

Water tankers were deployed during the recent droughts and people were again having to collect rain water in buckets.

"We were told that those tanks would be used and reused for emergency situations. We haven't seen or heard any word about whether they've been deployed yet," he said.

"People would be seriously after those things but they're also calling just for tarpaulins, just to be able to build some temporary shelters."

Perrotet said the effects of the cyclone further north and west in Fiji was likely to be more serious.

However, the cyclone had not dented the big-heartedness of Fijians, who were still offering hospitality to strangers.