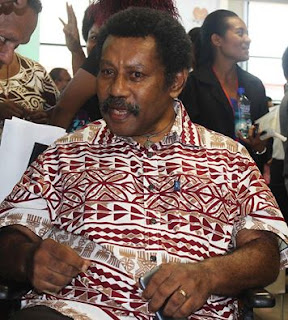 A series of high-level meeting between Papua New Guinean and Australian officials will take place in Port Moresby this week as part of preparations to host the APEC summit in 2018.
The Chief Secretary to Government, Sir Manasupe Zurenuoc, said the meetings with Australia will identify areas where the two countries can work together to deliver safety and security preparations for the APEC summit, as well as advance policy development.
These meetings will be the first of a series of consultations with the 20 other member economies that will take part in APEC Papua New Guinea 2018.
“APEC is an international forum and we work with other participating economies to advance policy objectives and ensure security co-operation,” the Chief Secretary said.
"Papua New Guinea will chair APEC policy development process in 2018 that is aimed at stimulating regional economic integration and growth.
“As host and Chair of the policy development process, we will have the opportunity to bring into the discussion issues that are important to developing countries around the Asia-Pacific, particularly development issues that matter to our island nations.
“In advancing this APEC agenda we look to past hosts for their perspective and we are doing this with Australia, as the host of APEC in 2007 and the G20 in 2014.
“We also have ongoing consultation with Philippines as the host in 2015, as well as Peru and Viet Nam as upcoming hosts.”
Sir Manasupe said safety and security preparations are one of the most intensive components of preparing to host APEC and these matters will be advanced this week.
“We will have around 200 APEC meetings between now and the end of 2018, and we have to do everything we can to provide a secure environment for our visitors.
“Security preparations range for general safety issues and vehicle movements, through to operations to ensure the safety of Presidents and Prime Ministers from global threats.
“We look forward to the discussion with Australia this week, the first of our working groups with security partners, that will cover issues such as airspace co-ordination, maritime security and special forces training.
“We thank Australia for the support that they are providing for our APEC preparations."
APEC Papua New Guinea 2018 will bring more than 10,000 delegates to locations around the nation in 2018, and advance policy matters that include increasing regional trade and investment, and development in sectors that include agriculture, maritime resources, tourism, mining and transportation.
Photo Caption: Chief Secretary, Sir Manasupe Zurenuoc at the official opening of the newly refurbished pinapple biulding, that is renamed after him - Sir Manasupe Haus
SHARE THIS
Share it Tweet Share it Share it Pin it