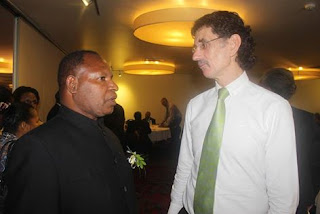 The country’s current bank legislation can be amended to ensure that banks redirect their investment focus towards Papua New Guinea’s renewable sectors, according to Trade Minister, Richard Maru.
Minister Maru says this would require banks in PNG to invest a certain percentage of their revenue, into agriculture, fisheries, Small to Medium Enterprises, SMEs, and tourism.
“In countries such as Sri Lanka, their government imposes a license where the banks lend their planning funds to sectors the government needs them to lend to, such as agriculture and SMEs.”
“So in the PNG context, if banks want a license to operate in Papua New Guinea, they must lend a certain percentage of their loan funds to these sectors and that must be imposed by law,” said Minister Maru.
At present, 70% of the country’s revenue is derived from corporate taxes and cash flows from the extractive industry trading against commodity prices, which depict a constant downward trend at present and have been for several months.
The same message was conveyed to the nation through Treasury Secretary, Dairi Vele during last week’s 2016 Leaders’ Summit, hosted by Prime Minister, Peter O’Neill.
Although there was no confirmation from PM O’Neill and the government if the country was experiencing cash shortages, there were profound presentations from various speakers of the Summit that pointed the renewable sector as PNG ‘saving grace.’
Minister Maru, says the country’s economy, through a government-bank synergy can be the answer in rejuvenating PNG’s renewable sector, which includes 6.1 million people directly or indirectly involved in agriculture.
“Banks in Papua New Guinea are investing more into low-risk business ventures and not prioritizing agri-businesses and SMEs, which are perceived to be high-risk.”
“The sectors that need to be grown are the sustainable such as, agriculture, SMEs, fisheries and tourism and these sustainable sectors will never grow without significant investment and technology."
“One the biggest problem in PNG is investment fund not reaching these sectors, despite millions and billions that are going to the banks,” said Minister Maru.
The country’s most extensive bank with the largest customer base, Bank South Pacific responded to Minister Maru’s recommendations.
BSP Group CEO, Robyn Flemming said BSP invests about K100 million to the SME sector while K300 million is injected into commercial agriculture.
“We agree that investment in SMEs and agriculture is part of nation-building and within BSP, we like to think that we are part of that nation-building.”
“We’ve got the best part between K80 million and K100 million in loans to various SME sectors.
"In agriculture, it’s predominantly with secondary support of the oil palm sector and we pumping in, for the best part of around K300 million.”
“We don’t have set percentages, but we have targets to increase lending to the agriculture.”
“SME is somewhat more viable then agriculture – agriculture is not high-risk but it’s certainly one that requires a lot of direct support from a training perspective, perhaps some form of support to be able to have the equivalent of a stabilization component so that when commodity prices are down, people still have some capacity to be able to reimburse loan repayments and banks can be innovative, in terms of the repayment structure,” Flemming said.
Photo Caption: Trade Minister, Richard Maru (left) having a chat with BSP Group CEO, Robin Flemming.