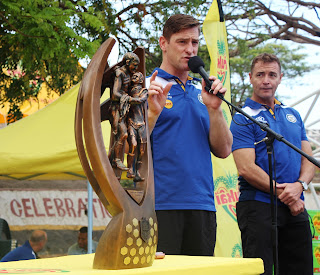 Papua New Guinea’s largest rice producer has used its 45th anniversary in PNG to strengthen its already firm foundations within the country through an on-going host of community-based initiatives and local investments.
Having been operational for longer than Papua New Guinea has been independent, Trukai Industries continued to build on its identity as the most trusted of PNG brands throughout 2015.
During a year in which Agricultural Minister, Tommy Tomscoll instructed rice companies to start investing money into assisting farmers, Trukai showed its commitment to the local industry by announcing plans to develop rice farming in PNG.
Their vision for the Central Province was recognised by the Amadi-Baga Integrated Land Group, who in August gave a further 20 hectares to develop a rice farm in the Kairuku-Hiri District. This follows on from eight months of hard work in piloting a rice project, from land preparation to harvesting.
“Contributing to wealth creation in the rural sector is something we are passionate about. This new chapter in our history is a big focus for Trukai as an organisation, and expanding the project in the future is the longer-term plan,” said Trukai Industries Chief Executive Officer, Greg Worthington-Eyre.
Agriculture will continue to be a focus for Trukai Industries in 2016, as it pursues opportunities for farmers in other provinces such as in West New Britain and Oro. Trukai’s influence has long extended beyond the rice fields to sport, more notably the national passion of rugby league.
Already a sponsor of the premiership winning North Queensland Cowboys since 2009, Trukai also came onboard as a major jersey sponsor of the trailblazing SP PNG Hunters in February, helping the fledgling team in its quest to claim the Queensland Cup, or Intrust Super Cup, as it is currently known. The Hunters fell one game short of the decider in their second year of the Australian-based competition.
The distinctive red, green and yellow Trukai logo was seen by millions across the world when the Cowboys defeated the Brisbane Broncos to claim the 2015 NRL premiership, in what was described as the best Grand Final match in NRL history.
Trukai had more good news for local NRL fans, bringing the Provan-Summons NRL Premiers trophy to Port Moresby for the first time ever last month.
Mr. Worthington-Eyre said he was pleased the Cowboys were able to share their victory with their many fans in PNG.
“The partnership between Trukai and the Cowboys has helped to grow the team’s fan base in PNG,” he said. “Their triumph is a cause for celebration not only for Trukai but also for everyone in PNG who has followed the team’s remarkable journey.”
Another highlight from 2015 was the successful execution of the biggest Trukai Fun Run so far in July. The main fund raiser for Team PNG’s athletes, the Fun Run acted as a pre-cursor to the XV Pacific Games in Port Moresby. A total of 16 centres and towns throughout PNG participated in the social event, which raised a whopping K100, 000. Funds raised were used to assist Team PNG during the Pacific Games and the Commonwealth Youth Games in Samoa, in September. Trukai has been a major sponsor of this event since 1993.
The Company’s 13 year partnership with the PNG Weightlifting Federation was also further strengthened during the XV Pacific Games, when it announced an additional K5, 000 incentive for every gold medal won by a PNG weightlifter. A haul of 13 gold medals meant that a total of K65,000 was given out.
With multiple projects already lined up across both the sport and business spheres for the year ahead, Mr.Worthington-Eyre said it is an exciting time to be involved with the company.
“We are looking forward to what is sure to be a rewarding 2016 and navigating the next chapter for Trukai beyond that.”
SHARE THIS
Share it Tweet Share it Share it Pin it